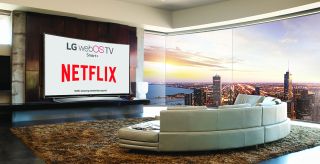 The transition to making 4K the de facto standard for new televisions continues on its merry way this week, with LG today announcing its 2015 range of TVs for Australia.

While the 4K OLED we were so impressed by was conspicuously absent from the announcement, there is still a wide enough selection of television models on offer that you can almost forget its unveiling back at CES 2015.

But that's one shallow puddle of disappointment in a sea of impressive pixels. With a significant push to deliver 4K to the masses, LG has partnered with Netflix to ensure that Australians will be able to access the streaming service's 4K library on its UHD TVs, provided the user's internet connection is up to the task, that is.

By applying different LED phosphor-based colours, the UF950T range is able to deliver deeper reds, greens and blues for a more vibrant image.

Also available in the UF950T series is a new backlighting approach, designed to enhance the lightest and darkest areas of the screen. Sure, it's no OLED, but it promises an enhanced viewing range.

There's also a 6-step upscaler on board these new sets, designed to take your pathetic old Full HD content and make it look closer to the glory that is Ultra HD.

Want the beauty of 4K with a slightly more approachable price tag? The LG UF850T and UF770T series are designed for tighter budgets.

They also run the upgraded WebOS 2.0 operating system and feature a quad-core processor to keep your video streaming services chugging along nicely.

Let's not forget the curve

Impressively, LG has decided to not to force curved screens onto its top of the line models as standard, instead making them an option for those who want the bent viewing experience.

The UG880T and UG870T ranges deliver technology on par with the UF850T but do it with a slightly rounded appearance.

If you like your top-of the line TVs bigger, then LG is also happy to comply. 79 inches may sound big to some, but the truth is that some areas cry out for screens 84 inches and above.

And if that still sounds small, LG is promising to launch a 105-inch model later in the year, although pricing for that particular behemoth is still TBC.