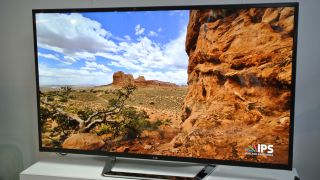 4K content is beginning to find ways of moving from its infant period and actually onto our televisions, and one unlikely contender is leading the way.

But it isn't Sony. In fact, it's likely you've never even heard of the movie-download service, named Odemax, which was the first to send a 4K film to a customer's home.

The movie - short film The Ballad of Danko Jones - was sent to the recipient's Redray cinema system, and was then played on a UHD screen.

Odemax claims to be the first to deliver 4K content in a file. In June this year, a Japanese telecoms company also made UHD headlines by streaming 4K-resolution video directly from the internet to TV set-top boxes.

But being able to download and store content will be more beneficial for a lot of people, so we hope Odemax will encourage the bigger names to start pushing 4K content to our living rooms soon.

Gaze into the future

That said, 4K might not want to get too comfortable as the next step in eye-busting HD is already rumbling beneath the surface.

To give a better idea of the power of 6K, Newlaunches points out that it's like shooting a 19.4 megapixel still at continuous full motion.

Despite its awesomeness, we wouldn't expect 6K to be taking off in the mainstream for some time. For one thing, 4K is still breaking through, so let's get that up and running first.