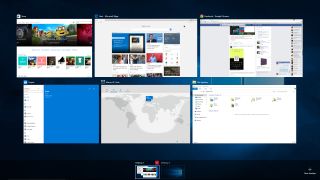 Windows 10 has polarised opinion ever since the first build trickled down from Microsoft's servers. Is it the future of computing, or merely a patched-up version of Windows 8.1? Cortona would pick the former.

You, on the other hand, have a much more balanced view and have probably already begun downloading Windows 8.1's successor to your machine. Once you've given it a whirl, why not check back to see if your thoughts match those of our writers below.

Windows has matured as an operating system and Microsoft's flagship product reflects the company's changing attitude towards its audience and its competitors. The whole journey to the launch of the Windows 10 today has been marked by the lack of arrogance that characterised the old Microsoft.

The new one seems more inclined to accept that the world has moved on, that customers are often right, that you need to work with, rather than against, competitors and that you lose some and gain some.

Windows 10 remains an excellent product overall, especially as it will be free for most of us. It will be very hard for Microsoft to please the hundreds of millions of potential users of Windows 10 but the company LOVES a challenge.

For me, the most exciting part about Windows 10 is Universal Apps. Windows users have suffered poorly designed, inelegant apps that lack cohesion for far too long. Compared to OS X, for example, the platform's productivity apps are lightyears behind.

Microsoft has got it right with Universal Apps, which look and behave in a similar manner no matter what device they're running on - be it a laptop, smartphone, tablet or even wearable. If developers can come up with attractive offerings brimming with personality that look great, and are both fun and intuitive to use, I could see myself getting roped into Windows 10's ecosystem.

I'm already excited about gaming on Windows 10 due to DirectX 12 and VR, and if Windows 10 can catch up to OS X's quality of apps, it could be a case of one OS to rule them all.

As exciting as the lead up to Windows 10 has been, there isn't anything truly revolutionary about the new operating system. Most of the Windows 10 "innovation" simply undoes the damage Microsoft did with the dreadful Windows 8 release.

Sure, there are several cosmetic changes, such as Snap Assist, that make navigating the operating system a bit easier, but most of the upgrades, like Task switcher, are just new attempts to resuscitate old, mostly unused Windows features. The real test for Microsoft will come when Windows 10 Mobile is released, presumably in September.

If the new Continuum feature truly enables users to maintain a consistent Windows experience across laptops, tablets and phones, then Microsoft will have once again changed computing forever.

Simply put, Windows 10 is the culmination of Microsoft making good on the new face of modern computing that it set out to create with Windows 8. This isn't some sea change that will drastically alter how we use our laptops and tablets, but rather a massively welcome refinement to the experience.

For Pete's sake, the most celebrated change in Windows 10 is the return of an honest-to-goodness Start menu. Most companies don't get second chances on missteps as dire as Windows 8, and Microsoft clearly recognizes that.

The Redmond campus has taken this opportunity to address almost every major gripe with that old operating system (OS). Topping it all off, the firm has introduced new functionality that just makes sense, like Xbox integration, Cortana, Continuum and universal apps.

Based on my time using Windows 10 in the Insider Preview, Microsoft has finally developed an OS worthy of your hard drive space even if some teased features are missing at launch. If Windows 8 was the rough, then Windows 10 is no doubt the diamond – it just hasn't been cut yet.