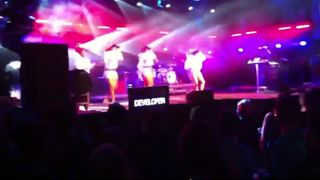 Microsoft has issued an apology for a ludicrous song and dance routine during an event to promote updates to its Azure cloud platform.

At the party in Norway last week, the company wheeled out the scantily clad troupe, who wiggled their posteriors to a bespoke song, seemingly entitled I'm a software developer (I'm here to party).

The cringeworthy track featured references to hard drugs ("CSS is my LSD" - are you serious?) and one altogether unpleasant utterance related to the developer's....shall we say, hardware.

"The words Micro and soft don't apply to my penis," were among the lyrics that flashed upon flatscreen TVs during the routine at NDC Oslo, as bewilders attendees looked on in disbelief.

We can't imagine he learned this one at crisis PR school, but Microsoft's corporate communications head seemed suitably embarrassed by the stunt, which he likely had nothing to do with.

"This routine had vulgar language, was inappropriate and was just not ok. We apologize to our customers and partners," tweeted Frank Shaw, hopefully just after firing the PC agency responsible for the farce.

Let's hope that Mr Shaw will find the strength to remove his palm from his face sometime in the next few weeks. Check out the carnage below.