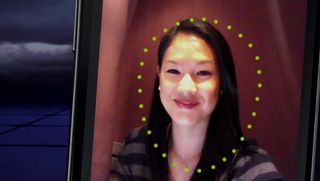 Your mother probably told you that if wind changed while you were pulling a face, it'd stay that way. So, she'd be aghast to learn Google may soon be relying on such facial contortions to unlock Android devices.

The company has filed for a patent that goes beyond the Android Face Unlock feature and would require users to poke out their tongues, wink or raise an eyebrow at the front-facing camera to gain access.

Face Unlock arrived in Android Ice Cream Sandwich, but a Liveness Check in the form of a blink was added in Jelly Bean, after folks craftily used photos to easily fool phones.

The recently-published patent now suggests Google is looking to banish all security fears by asking users to record a video of the "facial landark" during set up and then perform the said action correctly to unlock.

The phone would then check frames from the expression against the landmark video to assure that the gesture, which could also be an open-mouthed smile or a frown, was being performed by a real person.

Google is also prepared for the eventuality that this method could to be worked-around by fraudsters and has explained how light beams from the phone could be used to identify familiar glints in the user's eyes.

The patent filing explains how the phone could "emit light beams having different colours or frequencies, that are expected to induce in the eyes of a user a reflection of light having a corresponding frequency content."

All this seems pretty cool and all, but is pulling silly faces at your phone in public really preferable to typing in a secure password? Let us know your thoughts in the comments section.