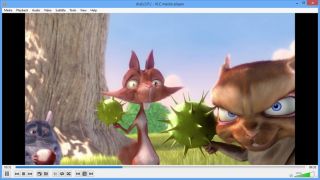 VLC Media Player (formerly known as the VideoLAN Client) isn't much of a looker compared to Windows Media Player and Apple's QuickTime. There are no prettily-designed menus or snazzy graphical flourishes. Instead, the software focuses on pure functionality and is all the better for it.

Consequently, VLC handles an impressive list of audio and video formats. It can play almost anything you throw at it - DVDs as well as video CDs, MP3, MOV and FLV files or DivX. It also supports modern H.264 / MPEG-4 AVC video, Cinepak, Theora and Real Video. We say 'almost', because VLC Media Player won't decode Indeo Video 4/5 (IV41, IV51) files. But then nobody uses that archaic format anyway.

Not only does VLC Media Player decode (almost) anything, but it runs on everything. There are versions for Windows, Linux and Mac.

It can also start to play back video files while they are still downloading, and even play zipped-up files without having to unpack them first. Its playlist feature, meanwhile, enables you to queue up a stack of videos, perfect if you want to plug into a big telly and watch downloads all night.

Like Recuva and Paint.NET, VLC Media Player is one of those powerful software essentials that you wish came with your operating system as standard. As it plays Microsoft's own WMV format, Apple .mov files and DivX, there's no real need for Windows Media Player, QuickTime, or any DivX software. VLC is the king of media payback. One media player to rule them all.

Get VLC Media Player for free