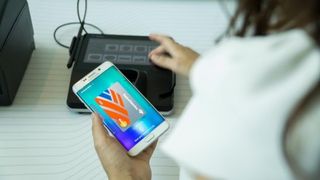 Samsung Pay, the Korean company’s contactless payment service, might soon be heading to non-Samsung devices in the near future.

Gadgets 360 spoke with sources familiar with the inner-workings of Samsung Pay who claimed it’s in talks with other high-end smartphone manufacturers, but there’s a big mountain to climb if it really comes to fruition.

The special thing about Samsung Pay compared to competing services like Android Pay is that it takes advantage of both NFC and MST technology to transmit payment data, which helps it cast a much wider net over retailers.

NFC functionality is common in today's smartphones, but MST (magnetic secure transmission) is currently unique to Samsung phones. It's a special antenna that tricks credit card readers into thinking that they've been swiped with a card. So essentially, it mimics cards, making it broadly compatible with your average card terminal.

Samsung's recent phones come equipped with both of said technologies, though the same cannot be said about other phones.

If Samsung Pay is to arrive on flagships of the future, Samsung will have to work out some sort of deal to push its MST-compatible hardware into these phones, which seems unlikely.

Given that the likes of Google and LG each are spearheading their own payment services, Samsung would really have to fork the big bucks.

So, unless each of those services independently adopts MST tech and compatibility–which could be possible in 2018 flagships–Samsung Pay will remain on its own phones, like the Samsung Galaxy S8, for the time being.