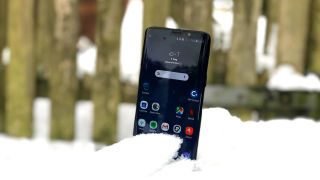 A new rumor suggests Samsung may be eyeing the opportunity to drop the iris scanner from its next flagship phone.

The report from South Korean site ETNews (and flagged by SamMobile) suggests the company won't include the tech on the Samsung Galaxy S10 and may leave an in-display fingerprint scanner as the sole piece of biometric security tech.

It's thought Samsung wants to stretch the screen on its phone out even further, and keeping an iris scanner would block the company from making an improved screen-to-body ratio.

However, while the iris scanner might be going, it's possible that facial recognition will remain, giving you at least one alternative to the fingerprint scanner.

Currently there are three rumored models for the upcoming Galaxy S10 range, with a more affordable version featuring a traditional fingerprint scanner while the other two devices come with the in-display tech.

But it's apparently unlikely that the company will be keeping the iris scanner for the cheaper edition even though it probably won't sport the in-display tech.

According to other reports, Samsung is putting its front-facing camera under the display to be able to avoid including a notch at the top of the device. If true then presumably this move to drop the iris scanner means it wouldn't work under a display like the selfie camera can.

This may just be the end for the technology that the company introduced on the Galaxy Note 7.