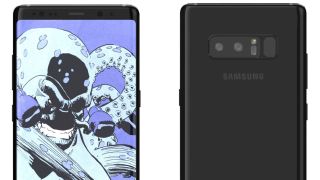 Is this our best look at the Samsung Galaxy Note 8 yet? It could be, as while these leaked renders aren’t from Samsung, they have been made by a third party case maker – although it’s unclear how in-the-know the firm is about the upcoming phablet.

The images were sent to BGR by case manufacturer Ghostek, the same firm which also leaked renders of what it believed the Galaxy S8 would look like back in January, but it turned out those weren't quite accurate.

That cast doubts over its latest offering for the Galaxy Note 8, as while it may have the general size and shape down – the placement of features such as the dual cameras and fingerprint scanner on the rear may not be quite right.

What we do know for sure is that we don't have too long to wait, as the Samsung Galaxy Note 8 launch has been confirmed for August 23.

We'll be reporting live from the New York event to bring you all the latest on Samsung's latest phablet.

Whether or not it ends up looking like the renders above remain to be seen, but we'll know for sure in just a few weeks time.