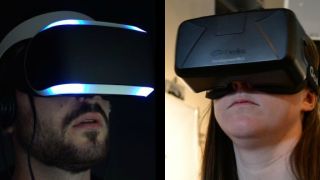 With these two on the way, Samsung has its work cut out for it

Last month we heard that Samsung was working on a virtual reality headset and it's looking increasingly likely that the company's VR plans are taking shape.

Samsung has now filed an application with the US Patent and Trademark Office to trademark the name 'Gear VR'.

The application doesn't tell us anything else about the device but the mention of 'VR' in the name certainly suggests it's the rumoured headset.

And despite the 'Gear' part of the name it probably won't run Tizen OS, as we've previously heard that Samsung has partnered with Oculus VR to use the company's software.

Rather than having its own screen the headset will apparently rely on your smartphone's display and will be used to both play games and display media.

We've also heard that Samsung plans to undercut competitors, which makes sense as relying on user's smartphones is sure to chop down costs.

While it's not known exactly when Samsung will launch the Gear VR, early reports claimed that it would at least be announced sometime this year.