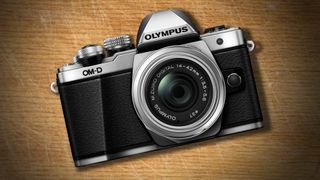 The original E-M10 sold by the bucketload thanks to its combination of small size, relatively low cost and feature-packed specifications. Many criticise the Micro Four Thirds format for using a slightly smaller sensor than regular mirrorless cameras and DSLRs, but the tiny E-M10 and its equally compact Micro Four Thirds lenses provide a convincing case for the smaller format.

The old E-M10 will still continue for the time being, but the E-M10 Mark II improves on it in so many ways that only the most penny-pinching photographers would opt for its older sibling.

Perhaps the biggest update is to the camera's image-stabilization system. The old E-M10 has a basic but acceptable 3-axis stabilization system, but the E-M10 II has the 5-axis system found in the more expensive E-M5 II and E-M1. Olympus says its shutter speed advantage has gone up from 3.5 stops to 4, but although that doesn't sound much on its own, the extra axes of movement cope with a wider range of subjects and shooting conditions, including video.

Olympus has also upgraded the electronic viewfinder replacing the original camera's 1,440K-dot display with a much sharper 2,360K-dot screen. The viewfinder is what has always set the E-M10 apart from its low-end rivals, most of which rely solely on the rear screen for composing images and don't offer a viewfinder at all.

Olympus says the continuous focusing performance has been improved, and the continuous shooting speed has been increased from 8 frames per second to 8.5fps. Olympus has added multiple frame rates to the movie mode and there's now a 4K time lapse mode.

There's even a new 'focus bracketing' option which can take a series of shots at slightly different focus settings – fans of macro photography could use this to create 'focus stacked' images with massive depth of field.

The E-M10 might be the base model in Olympus's DSLR-like OM-D range, but that doesn't mean it's a dumbed-down model for novices. We like it because it's actually a pretty powerful camera, and the E-M10 II just takes this a step further.

The E-M10 II combines a sturdy metal body with the kind of twin-dial control layout you normally expect to see only on mid-range enthusiast cameras and above. With the new model, Olympus has changed the control layout slightly to put the power switch on the top and clusters the model dial and control dials on the right side of the top plate, but otherwise it's barely larger than its predecessor.