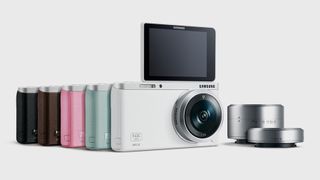 Samsung has introduced a new compact system camera, the NX mini, which it says is the slimmest and lightest in the world. It features a one inch type sensor, the same kind as found inside the Nikon 1 system.

Weighing just 158g (body only) and measuring a mere 22.5mm, Samsung says that the camera has been designed thanks to consumer demands.

Despite the small size, it manages to include a 3 inch LCD touchscreen which rotates through 180 degrees.

The sensor is a 20.5 million pixel BSI (backside illuminated) CMOS sensor and is a one-inch type. Other Samsung compact system cameras use the much larger APS-C format sensor. The Nikon 1 camera range uses a once inch sensor type, as well as fixed lens compacts, the Sony RX100 II and Sony RX10.

As with all of Samsung's SMART cameras, the NX mini also features Wi-Fi and NFC integration for direct sharing or remote control from a smartphone or tablet.

Samsung has also introduced three NX mini lenses - current NX lenses are not directly compatible with the camera. The NX-M 9mm f/3.5 has an ultra-slim design, while the NX-M 9-27mm f/3.5-5.6 will be the standard zoom lens. Finally an NX-M 17mm f/1.8 is designed to give shallow depth of field effects.

A specialized mount adapter for current NX lenses will be available to purchase separately.

The Samsung Galaxy NX Mini price will depend on the kit variation it is bought in. It will cost US $449 with the 9mm NX-M lens, or US$549 with the 9-27mm lens and SEF-7A flash. You'll be able to get your hands on one from April.