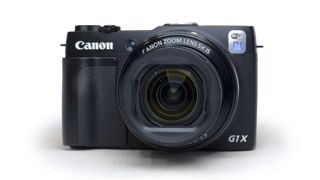 The sensor inside the G1 X Mark II is almost APS-C-sized. Almost.

Canon has upgraded the Canon G1X, a compact camera which was met with a mixed reaction when it was launched a couple of years ago.

The host of new features present on the G1X Mark II could make it a more serious contender in the premium compact camera area of the market - something which has since seen been dominated by the likes of the Sony RX100 II and the Fuji X100S.

The G1X II uses the same 1.5 inch, 14.3 million pixel, sensor as in the original model. This size sensor is over twice the size as the one-inch sensor as found in the RX100 II, being closer in size to an APS-C device. The pixels are also 4.5x larger than those found on the PowerShot G16, which should make them more sensitive to light when shooting in lower light conditions.

Although the sensor remains the same, Canon has introduced a new lens. The G1X Mark II features a 5x optical zoom, or 24-120mm in 35mm terms, which is capable of f/2.0 at its widest point, rising to a still impressive f/3.9 at the telephoto end of the optic.

Canon has also included the latest Digic 6 processing engine inside the G1X II, which is claimed to be 2.4x faster than Digic 5, the previous generation processor. Canon says that this facilitates a 56% reduction in shooting lag, fast continuous shooting, and a quicker operational speed. Digic 6 also enables Full HD video recording.

On the back of the camera is a three-inch LCD touchscreen, which tilts downwards and all the way upwards to face the front for self-portraits. Canon has decided to remove the optical viewfinder from the camera, and instead sell an EVF separately.

Wi-Fi and NFC is incorporated into the camera, while the Canon Window app has been upgraded to include remote shooting for the first time.

The Canon G1X Mark II price will be available in Australia from May 2014.