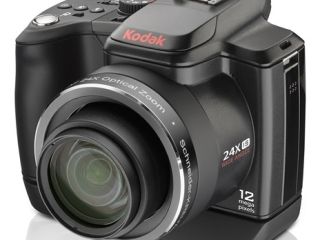 The Olympus SP-590UZ might have run off with 'world's most powerful zoom' at CES. But the 24x Kodak EasyShare Z980 isn't far behind.

Together with Kodak's Smart Capture feature, the 12 Megapixel Z980 can automatically adjust the picture settings in pursuit of brilliant images. There's even an HD video recording mode.

Kodak's Smart Capture technology combines several features into one intelligent system. For starters, the Face Detection system can track up to five faces at a time, focusing on the most prominent in the shot.

"The Kodak Z980 is an ideal camera for photographers looking to do more and get more from their digital camera," said John Blake, General Manager Digital Capture and Devices at Kodak.

"The versatile lens, combined with our exclusive Smart Capture feature, lets consumers shoot great pictures in any setting – from daylight to night or from close-ups to landscapes, the camera makes adjustments automatically."