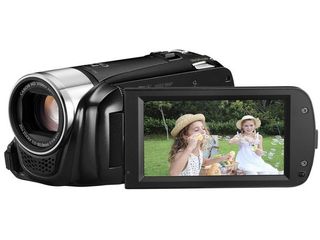 The HF R28 is one of Canon's newest HD camcorders

Not content with the slew of digital cameras announced today, Canon has also released details of its latest camcorder line-up at CES.

The 10 new camcorders from Canon cover the whole video-shooting spectrum, from standard def right through to professional-quality capture.

It's not all about HD though, with the Canon Legria FS400 featuring as Canon's smallest ever standard-definition camcorder, while the Legria FS46 and FS406 also pose as affordable options for standard-def video capture.

The new camcorders join the top-end flagship Legria HF G10 on the shelves at some point this year; unfortunately neither the UK release date nor UK pricing have been revealed as yet.