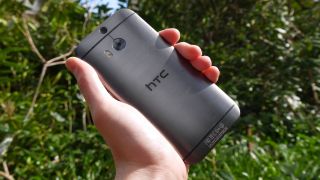 Following our article on why it's the photographer, not the camera, that ruins pictures taken with the HTC One M8, our resident Fighting Talk columnist delivers his take on why the camera needs to be better.

How long does it take to fall out of love? About 90 minutes in my experience.

That's because this week, I became smitten with the HTC One M8. And yet, before it had even finished its first charge, I was already plotting how to sell it.

All because of one simple let down: the camera.

Remember, this is a personal column here. I know I'm going against the findings of TechRadar's excellent One M8 review - but for me, I don't want the fast shutter speed, the background de-focus, the wider ability to take pictures. I want to take great snaps that I'm proud to show off, and I don't want to think about it.

I wouldn't buy a Porsche with no wheels. If you sold me a mansion with no floor or ceiling, there'd be hell to pay. And likewise, with the HTC One M8, a premium device, you've created a beauty queen, with an unpleasant character trait.

It was love at first sight for me. I saw the HTC One M8 and instantly had to have it. Out came the credit card, out went the iPhone 5S to the great auction site in the sky and so began the start of bliss.

And I'd take great photos. But I just can't. Not with what you gave me.

I know that Marc Flores, our resident camera phone expert, has ably argued that it's the person, not the camera, that takes bad pictures. But I don't care.

Never mind all the science. Quit it with the explanations. The UltraPixel camera was not universally adored in the original One. And it's not better here.

HTC's obviously a company that listens. It told us it reintroduced the SD slot because it had taken note of what consumers said. So, what happened with the camera here? Did you get a little deaf all of a sudden, or what?

I know, some people will say the camera is fine. And there'll be reiterations of the argument about serious snappers not relying on a camera phone anyway.

But that's not the point. The point is that I fall into the middle - like so many others. I don't carry a DSLR around, but I do like to take photos from time to time and hey, you know what, sometimes I print and frame them. I won't be framing any taken with the HTC One M8 though.

It's a camera that's allegedly great for low light, but can't cope with pretty normal bright daylight. It should be marketed as a phone for vampires.

And as for this argument that photos are fine for uploading to Facebook, sure they are. Unless you're viewing Facebook on a computer and then seeing the pictures in a much larger version than a phone screen. Not so good now, eh?

I feel cheated. I feel upset. I feel angry. How can a premium device scrimp so much here. It's either naivety or arrogance. Or a bit of both. And boy, it's sad. We all love the underdog - and it's been sad to see HTC trying to climb up that ladder whilst being kicked by Samsung on the rung above.

This was your chance of redemption HTC. You could have given 100% but instead, you gave 95%.

I've reviewed dozens of phones and tablets for TechRadar over the years – each time putting them through their paces in the most unbiased, rigorous way possible.

But as well as being a professional, I have a love/hate relationship with tech, and that's what these columns are all about: the passionate howlings of a true fanboy. Tell me why I'm right, wrong or a hopeless idiot in the comments below or by tweeting @techradar or @phillavelle.