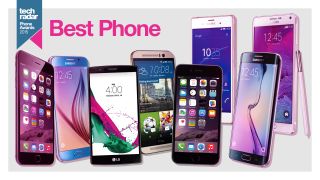 The TechRadar Phone Awards are imminent and in the run up to the big day we've been announcing the shortlist for all of the award categories.

We've already revealed our shortlists for the Best Value Tablet, Best Value Phone, Best Innovation, Best Wearable and Best Tablet awards, and now today we can unveil the handsets that are in the running for our coveted Best Phone award.

We have seen some absolutely amazing smartphones this year, so whittling down the shortlist to only eight was no easy task. The devices that we list below truly are the best of the best, and represent everything that is exciting about modern smartphones.

These contenders have been brought before our panel of expert judges and we will announce the winner on July 23. In the meantime, check out the rest of Phone Week coverage on TechRadar to help whet your appetite for the awards.

HTC obviously hoped lightning would strike twice with the HTC One M9, its follow up to the excellent One M8, as it has stuck close to the design of the older handset. Has HTC's decision to stick with what is successful and not reinvent the wheel paid off, or does it feel like a lack of ambition?

Another year, another excellent iPhone from Apple. It's a bit like clockwork, and considering the Cupertino's preoccupation with the Apple Watch, it's good to know it hasn't taken its eye off the smartphone ball, as the iPhone 6 is another triumph.

Apple's entry into the world of super-sized phablet smartphones was a long time coming, but the iPhone 6 Plus proved that it was worth the wait. The huge 5.5-inch screen gets a welcome resolution bump to full HD and Apple's designers have made it one of the best looking phablets on the planet.

With the LG G4, LG wanted to make a smartphone that pleased everyone. While this can sometimes result in disappointingly bland jack-of-all trades, LG managed to pull this off. This is a smartphone that will appeal to almost anyone, but with enough eccentricities and quirks to keep it interesting.

Samsung paved the way for large screen devices that blurred the lines between phones and tablets, and with the Galaxy Note 4, it has proved it's still king of the phablet. The 5.7-inch screen is big and beautiful, and the extra size of the handset has allowed Samsung to pack in some fantastic tech into this excellent device.

Samsung needed to silence the critics and prove that it could make a flagship smartphone that would blow the competition out of the water – and that's exactly what it did with the Samsung Glaxy S6. This is a smartphone made by a manufacturer at the top of its game, and packs everything you want out of a modern phone including an amazing camera and super sharp screen.

Releasing a flagship smartphone shouldn't be about playing it safe; it should be about taking risks, innovating and giving us something that we've never seen before – which is why the Samsung Galaxy S6 Edge is one of the best smartphones we've ever seen, and earns its place in our shortlist.

Sony's attractively designed flagship, the Xperia Z3, doesn't just look good – it's got the powerful chops to go toe-to-toe with even the latest smartphones. If you're a PS4 owner you'll be bowled over the by the Remote Play feature, but even if you don't own Sony's console, you'll find a lot to love about this handset – especially its camera.