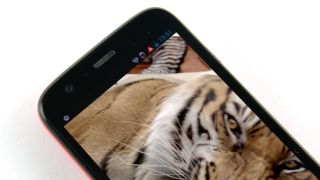 Claws out as the real fight begins

You could have forgiven Motorola for cancelling its MWC press event: after all you would assume that most of the planning was done before the company's sale to Lenovo and the announcement that its CEO was leaving.

But Motorola's decision to come out all guns blazing sent a clear message to the rest of the market: The Moto brand is here to stay.

This was a tigerish conference that saw Moto variously hitting out at ugly wearable tech, announcing that a Motowatch was on the way, insisting that leaving Google behind was a good thing and laughing off questions of Motorola's demise.

Assuming that a trio of VPs were not likely to say anything too fascinating, much of the media chose to skip the conference and the inevitable trek across Barcelona - but those who did make were rewarded with one of the most exciting conferences of the show.

Throwing caution to the Easterly wind

Companies going through tough times tend to err on the side of caution, waiting to see where the chips fall before making statements that could come back to haunt them - or, worse, force the hand of new owners.

But the triumvirate of Steve Horowitz, Mark Randall and Rick Osterloh, drafted in to take over from the departing CEO Dennis Woodside for the conference, were not content to stonewall and even took on a difficult Q&A.

Randall explained his confidence to TechRadar later, saying: "The thing is, the development cycle is pretty long so we know all of our plans for 2014 and we've spent the whole of this week sharing those plans with our carrier partners and they are like 'wow - this is an amazing portfolio' so we do feel confident.

"Today the consumers are seeing the tip of the iceberg and there's lots of stuff just under the surface which we will announce later on in the year. We've also presented it to Lenovo and they love it as well."

But what about beyond 2014? Will Lenovo keep the Moto brand going or discard it like an opened Trojan horse after getting a foot in Western doors?

"We believe Lenovo will back us beyond the year as well," added Randall.

"From their perspective, most Chinese manufacturers have tried to break in to [Western markets] have had limited success, virtually none in the US, so we believe for them it makes a lot of sense.

"I would say they will leverage the brand for more than the coming year. Lenovo has said publicly one of the reasons to buy the company is because of the brand."

Frankly, this confident and open approach is exactly what Motorola needs, especially with the waters as muddy as they are. A cancellation or even a subdued event would have screamed of a rudderless ship, under new management and with a panicking crew.

Instead we got a bit of bite from Moto, and that - more than any proclamation made by the execs - gives me hope for the future of an old favourite phone brand as it sails boldly into Chinese waters.