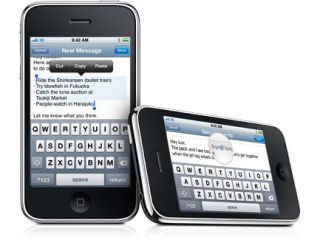 When Google released the Nexus One the inevitable question was quickly asked: 'Is this phone designed to compete with the iPhone?'

Google naturally sidestepped the issue, but the point still stands – this phone is the best equipped to lay the Android smackdown on the iPhone's dominance.

But what if you're standing in a shop, unable to choose between the two? (OK, we know you can't buy the Nexus One in a shop... but you get what we mean.) Or what if you're sick of that iPhone and want to know if making the Google leap is a good idea?

Luckily for you TechRadar is on hand to give you all the facts before you make such a life changing decision: here's the iPhone vs the Nexus One.

Both have a big touchscreen, right? Yeah, but that's where the similarities end. While both are employing capacitive displays (more accurate than resistive, but can't be used through gloves) the sizes are very different. Where the iPhone has a 3.5-inch screen with 480 x 360 pixels, the Nexus One packs a 3.7-inch, 800 x 480 display.

Might not sound like much? Trust us, it is. That extra 0.2 of an inch is noticeable in elements like web browsing, and the increase in resolution is massive when watching videos and similar, making it a superior device for watching videos.

The Google Nexus One also uses an OLED screen, which means the colours are more saturated, blacks are blacker and whites are more crisp.

Both are pretty spiffy when it comes to touch sensitivity, reacting to the merest brush, although the gloss of the iPhone's screen does make your finger glide that little bit better.

It's not all about hardware of course – the thing you see every day is the home screen, so you want it to be as good as possible.

To that end, this is a tough one to call – the iPhone and Nexus One offer very different options.

The iPhone has the classic interface we all know – lists of icons in a row offering quick access to all the things you like to play with regularly, and a swipe to the left taking you to the quick search screen. It's crisp, simple and easy to use, with minimal fuss.

But Google's Android OS, coupled with the Nexus One, offers something very different. We're talking living wallpapers that react to music and touch, five separate home screens to customise and widgets.

Widgets – they're just brilliant at times. Mini-Facebook that offers simple access to status updates, a music player you can place where you like, YouTube and Google search – the list goes on, and that's before we talk about the supreme customisation on offer for placing your icons where you want them.

We're more keen on the Android OS, but we can see why so many people are drawn to the simplicity of the iPhone.

For the tech-heads and stat fans out there (you know who you are), the hardware under the hood of both phones is very different – The iPhone 3GS packs an ARM Cortex A8 600 MHz effort, while the Nexus One has a Qualcomm Snapdragon QSD8250 1GHz processor.

But it's not all about the headline stats – it's how they work that makes the difference, and in relative terms the iPhone is very impressive. In day-to-day use, the iPhone shows very little in the way of slowdown until it starts getting to the deeper and more intensive applications.

The Nexus One, by comparison, has an ever so slight lag on the home screen, although it's barely noticeable. But it's not got the completely slick edge the iPhone has, and that's important.

However, get involved with things like lists of browsing through a number of pictures, and the Nexus One comes into its own, whipping through it all like nothing before, and anyone that's sat there waiting for a picture to load will know that's worth its weight in gold.