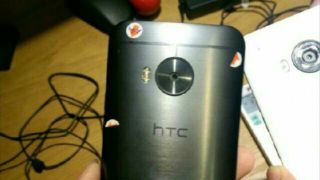 We know much more about the HTC One M9 than we did this time last week, but there's less clarity around the Plus version that the manufacturer is rumoured to be preparing to go alongside it.

Right now, we're not sure if it's going to be bigger or the same size as the 5-inch HTC One M9, though most of the internet chatter of recent days points to a device that will feature more powerful internal components.

Whatever the story with the HTC One M9 Plus, we now have a bunch of newly leaked images of what could be the new phone, courtesy of Mobilissimo, NWE and @upleaks - follow the links to see shots of the phone being held and what looks like a promotional picture from HTC's PR department.

However, it's not certain that this is the new phone. There are a lot of similarities between this and the current flagship... could it be an early prototype of the One M9?

But if it is correct and you're thinking about splashing the cash on an HTC One M9 then you might want to hold off until the Plus edition is out in the wild too - one of the biggest rumours we've come across is that it's going to feature a fingerprint scanner.

It's not definite that it will end up being called the HTC One M9 Plus - but there's a growing stack of evidence that HTC does have another high-end smartphone up its sleeve.

We don't know when we can expect to see the handset, how much it's going to cost or where in the world it's going to be available, but the new pictures should be enough to tide you over until HTC has something official to say.