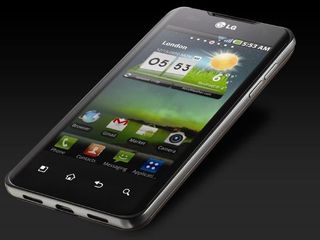 The new LG Optimus 2X 'superphone' is claimed to be the most powerful phone on the planet. At least for now.

With Nvidia's Tegra 2 platform powering it, that's not too much of a stretch, though. The dual-core processor is heralded by Nvidia CEO, Jen-Hsun Huang, as something of a wonder-chip, even going so far as to claim it can "leap tall buildings". And until Nvidia's just-announced desktop ARM-based system on a chip arrives, Tegra 2 is an incredibly important part for the green graphics company.

Huang believes these new 'superphones', as he calls them, are going to be "computer first and phone second". And, with the Tegra 2 dual-core processor inside them, devices like the LG Optimus 2X are going to be at the vanguard of this new wave.

We saw the new phone running, impressively, via a HDMI output on the handset capable of feeding 1080p content directly to your HDTV. With that, the phone was able to output to a projector aiming a frighteningly large representation of Angry Birds onto the screen, as well as play back HD video content without breaking a sweat.

LG's Vice President, Yongseok Jang, took to the stage with Nvidia's Jen-Hsun Huang to demonstrate both the phone and their new partnership.

Calling it "beauty outside, monster inside", LG obviously believes the design is important, but the power inside the device is just as vital to its long-term success.

Running Google's Android OS the LG Optimus 2X is a phone capable of some impressive feats. Not least of which is that 1080p output – being able to run HD content on the phone, and from the phone, is a definite winner.

There's also the multitasking capabilities offered by the Tegra 2 platform and the Flash acceleration, born of the work Nvidia has done with Adobe.

Huang did try to stick the boot into the opposition by talking about what could happen if your phone didn't support Flash: "How sad is it for your kid to show up at one of these websites and for you to have to explain what Flash is to a six-year-old. I mean, that alone is reason to make sure that your device has Flash in it."

So if you don't have a Flash-capable phone then you're making the kids cry...

The gaming prowess of the Tegra 2 platform is impressive too, we had demonstrations of games running the Unreal 3 Engine, working cross platform with the PC and PS3, as well as a proprietary 3D engine operating on the hardware.

All of this is very impressive and if you can combine the dual-core processor with decent memory, or something to speed up the definite lag between starting an app and seeing it load, then Tegra could well do some damage in the smartphone – sorry, superphone – market.

Let's just hope it's got a good battery...