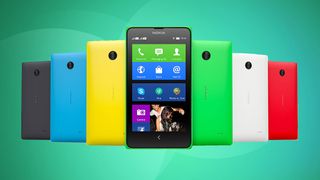 Nokia's eye-raising Android launch at MWC was not an anomaly it seems, as reports suggest the Nokia X is getting a successor, possibly as soon as the end of the month.

That's according to 'reliable sources' speaking to BGR India, which claim the handset will be announced sometime in the week starting 23 June.

This isn't the first we've heard of the Nokia X2, or whatever it ends up being called. Last month it was suggested that a new Nokia X device would be arriving with a dedicated home button.

Since then specs for the device have also popped up on AnTuTu.com, pointing to a phone with a 4.3 inch 480 x 800 display, a 1.2 GHz dual-core Snapdragon 200 processor, 1GB of RAM, an Adreno 305 GPU, 4GB of built in storage and a 5 megapixel camera. The benchmark also claims that it will have a 0.3 megapixel front facing snapper and run Android 4.3.

All of that makes it a low end device, but one that's a modest upgrade over the original Nokia X. We weren't thrilled by the performance of the original handset, even considering its low price tag, so hopefully this new one will fare better.

As with the first Nokia X it's likely to be aimed primarily at emerging markets, so if and when we'll see it in the UK is unknown, but this boost in specs could be the very thing Nokia is doing to get the handset ready for the more developed markets.