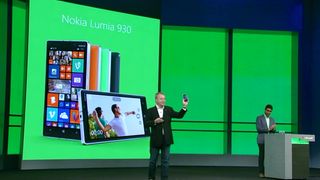 It's packing Windows Phone 8.1, of course, and features a 5-inch Full HD display. The PureView camera rings in at 20MP and features optical image stabilization and Zeiss optics, while there's an HD 1.2MP wide-angle camera affixed to the front.

With the new Lumia, the Nokia Camera app features something called Living Images. Nokia describes it as a way to "turn static pictures into living memories," but to use it basically sounds like Nokia's answer to HTC's Zoe.

On the sound side, the 930 features four high-performance digital microphones, allowing for directional recording. During an on-stage demo the sound was crisp and surround.

Nokia, which pending regulatory approval is almost completely Microsoft's, has managed to pack in wireless charging as well, a cordless way to charge the 2,420mAh battery.

The Lumia 930 runs on a 2.2GHz quad-coare Snapdragon 800 processor and houses 32GB of internal storage and 2GB of RAM. It's LTE capable and features Bluetooth 4.0 LE.

As for the rest of the phone, the display is 1080p with 441 ppi. Touch may be a forgone conclusion with smartphones these days, but the Lumia 930 does feature Super Sensitive Touch for what it's worth.

Parts-wise the Lumia 930 is built on an aluminum frame with a polycarbonate back.

The Lumia 930 will be available in June starting in Europe, but don't look for it in the US as Nokia has thrown its hat in with the Lumia Icon and Lumia 1520. That device, by the way, will get a fresh coat of green paint.

Check it out in action below: