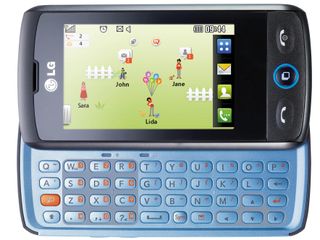 LG, not content with announcing the GD900 Crystal and Viewty Smart in the last few days, has managed to launch two new phones with a social-networking flavour, the GW520 and GT505.

Both phones offer the chance to have your friends pokes, messages and whatever else it is you want from the site pushed directly to the handset, rather than having to constantly go back and check.

Users can also update their sites from the phone, as well as picking up work and personal email thanks Microsoft Exchange ActiveSync.

The former is a landscape slider, enabling full a full QWERTY keyboard coupled with a 2.8-inch touchscreen.

It may only have a 3MP camera, but it has full 7.2Mbps HSDPA internet and lets you create animated icons in LG's 'LiveSquare' to represent your favourite contacts for easy access.

The latter, the GT505, is more navigation focussed, with Wisepilot built into the phone from the box (albeit only a 30 day trial, which is a bit sneaky). This means turn by turn navigation with both 2D and 3D mapping, so you could probably just throw the TomTom out the window. Or sell it.

The GT505 has a 3-inch touchscreen and (obviously) GPS, with a nifty 5MP camera, although we've yet to find out whether this comes with an awesome flash or anything.

It too has HSDPA connectivity, although it only runs at 3.6Mbps, so not as fast as its dinky brethren.

It will be available on Orange from next month, while the GW520 on a number of networks in June as well. No word on pricing as yet, but then again we never get such awesome information at the start. Perhaps it ruins the surprise.