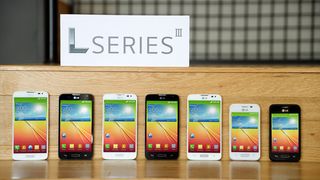 LG's pre-event announcements are getting earlier and earlier with the company confirming the arrival of its new L Series III Android phones more than a week before MWC 2014 kicks off in Barcelona.

The third-generation L Series phones - the L90, L70 and L40 - come with a variety of display sizes and specs, but each have the latest version of Android 4.4 KitKat on board.

All three devices will be on show at MWC, which begins in earnest on February 24. We'll be on hand at the LG stand to take a look.