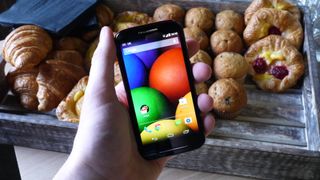 Motorola is doing something strange. It's sending certain members of the technology press a mysterious box with an "exciting" item inside and each should be arriving tomorrow (February 25).

We're all set to get one on the mid-week "hump day" and we're hoping to share more details on its contents tomorrow.

In the meantime, the rumours of of a Motorola Moto E 4G edition have been reinvigorated and we think the two events may be connected.

An LTE packed version of the Moto E has been rumoured for quite some time but it has once again leaked with Verizon branding all over the back.

As picked up by Android Police, the Moto E 4G is rumoured to be much the same as the handset as the last version launched in May last year but it'll come with LTE connectivity built in.

Motorola did a similar thing with the Moto G by releasing a 4G version a couple of months along the line.

It has been a longer wait for the Moto E but it is more than a little frustrating for those who have already shelled out money for the Moto E without the LTE connectivity.