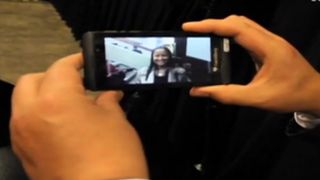 Is this the first, fully touchscreen BB10 device?

The first, fully touch-screen BlackBerry 10 device may just have been caught in the wild thanks to a cheeky Mexican video.

Spotted by the guys over at SlashGear, the video comes courtesy of holatelcel, and features a well suited chap running through some of the key features we witnessed in our recent hands on BlackBerry 10 review.

The handset itself, thought to belong to the new "L-Series" range, looks similar to the Dev Alpha B device we got our mitts on earlier this week, however the corners are more rounded, and the bezel above and below the screen may have shrunk a little.

It also seems to follow the design of the handset which we saw in a video a few weeks ago, which claimed to be an internal promo video for RIM.

RIM has stayed pretty quiet on details of its BlackBerry 10 devices, telling us that it plans to launch two BB10 handsets in the first quarter of 2013.

The first will be a fully touchscreen device, which is expected fall into the "L-Series" category, and the second, sporting the firm's well known QWERTY keyboard, could be the first in a range called the "N-series".

We've contacted RIM about this video and we'll update this article once we hear back.

Update: As usual, a RIM spokesperson said: "we don't comment on rumour, speculation or potential leaks"

From Vimeo via SlashGear