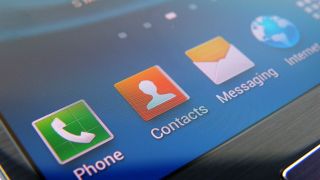 Bored of S5 rumours? Well, here's another: Samsung could be struggling to make enough high-res screens

Last week we'd have bet heavily on a few inalienable truths about Samsung's next flagship phone: the Galaxy S5 will have a larger screen, it'll come in two flavours, and the headline model will have a QHD display.

But that suddenly looks a little less likely according to ET News, which claims that the Galaxy S5 will launch in two flavours, but the first to hit the shelves will be the Full HD S5 (in early April / late March, according to the latest information) followed by the QHD option later in the year.

Separate sources have also confirmed this to TechRadar as well, which means we're inclined to believe the veracity.

The question is whether it's the display itself that's tough to make, or Samsung being able to increase the graphical processing power to a sufficient level to run the pixels – either way, the QHD panels have not even begun production, according to the report, while Full HD versions (which use a new type of pixel arrangement to improve the screen over the Galaxy S4) are already rolling out.

There's also a question over the frame to be used with the S5 – will the QHD model come with a metal frame, or will that be used to give the Full HD flagship some lustre?

Rumours suggest that it might be tricky for Samsung to produce metal bodies to the level required for a widespread handset like the S5, which would explain the need to have two options on sale.

Either way it's less than a week until we see one of the (likely) big-hitting phones of 2014 – we just can't wait until the speculation stops.