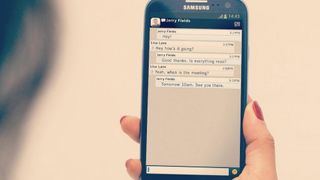 Have they instagrammed this press shot?

BlackBerry has told TechRadar that the date mentioned in the T-Mobile UK tweet is inaccurate, and that the company has never indicated a specific date for the release of BBM on iOS and Android.

"On May 14, BlackBerry announced plans to make its ground-breaking mobile social network, BlackBerry Messenger (BBM), available to iOS and Android users this summer, subject to approval by the Apple App Store and Google Play," BlackBerry said in a statement.

"While there have been reports that BBM will be available to iOS and Android on June 27, this is not accurate. We will communicate an update as soon as we have an availability date to share."

On a related note, the tweet from T-Mobile UK with the June 27 date has since been deleted.

The free download of BBM for iOS and Android owners will be landing on June 27, so non-BlackBerry users can finally plan those riots they've been hankering after.

Android users will need to be rocking at least Android Ice Cream Sandwich, while the app will only work for iOS users on iOS 6.

It will eventually offer some added extras like voice, screen share and video calling, but these won't be available from the get-go - you'll have to settle for regular ol' text-based messaging to begin with.

BlackBerry is hoping that it can tempt iOS and Android users away from iMessage and WhatsApp, but with these competing messaging services already well bedded in on devices, the 'Berry has a tough old fight on its hands.

Still, one less reason to get a BlackBerry, eh?