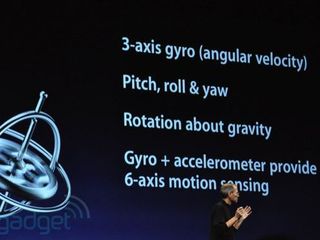 Apple has released new details regarding the iPhone 4 and its gaming capabilities, announcing something called 3-axis gyro.

This, alongside the accelerometer makes the iPhone a true virtual gaming machine, adding motion sensitivity that rivals the PS3 controller.

To show off the technology, Steve Jobs at the WWDC 2010 played a game of virtual Jenga-like game on the device, slightly moving the iPhone 4 to knock out individual blocks.

The results were impressive, paving the way for a new wave of games that can benefit from this precision of movement.

Steve Jobs announced that there is 15,000 apps a week that are entered into the App Store, with 225,000 apps available now.

Both Zynga and Activision showed off new games for the iPhone - Farmville and Guitar Hero respectively.

Apple patented gyro technology for the mouse back in February, with the note: "Today's patent focuses on introducing a "rotatable mouse" using new sensors and a triple-axes gyroscope that detects the roll, pitch, and yaw of the mouse. That translates in allowing the user to tilt the mouse one way to cause a horizontal scroll and another way to cause a vertical scroll and yet another to tilt a graphic as shown."

This seems to be an update of this technology.