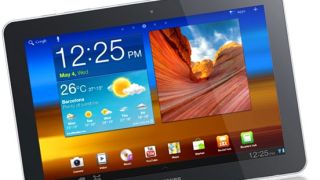 Is it an iPad or a Galaxy Tab? - apparently it's too close to call

According to Apple it's not the only one concerned about the resemblance some of Samsung's products to its own offerings, claiming Google has also raised the issue with the Korean firm.

We've all seen and heard the well documented patent disputes between Apple and Samsung, as the Cupertino-based firmed battles in court accusing its rival of copying its designs in some key products.

However Apple is now adding another piece of evidence to its case, and this could well be a biggy, as it claims Google itself warned Samsung about the design of the Galaxy Tab and Galaxy Tab 10.1.

In an Apple trial brief seen by AllThingsD, the iPhone and iPad creator makes some interesting claims.

According to Apple, in February 2010 Google approached Samsung and said the Galaxy Tab and Galaxy Tab 10.1 were "too similar" to Apple's iPad and told the Korean firm there should be a "distinguishable" design difference between the products.

Apple claims that in 2011 Samsung's Product Design Group confirmed the Galaxy S "looks similar" to older iPhone models, something it noted was "regrettable", with famous designers also warning the firm that the handset "looked like it copied the iPhone too much".

Of course Samsung has already hit back, claiming that without its innovation Apple would have never been able to launch the iPhone.

The Wall Street Journal got hold of Samsung's trial brief which reads: "Samsung has been researching and developing mobile telecommunications technology since at least as early as 1991 and invented much of the technology for today's smartphones.

"Indeed, Apple, which sold its first iPhone nearly twenty years after Samsung started developing mobile phone technology, could not have sold a single iPhone without the benefit of Samsung's patented technology."

There's no sign of a conclusion to this ongoing row any time soon, as neither side will want to back down.

It will be interesting to see what Apple will bring with its sixth generation of phone, and whether anyone will accuse it of copying designs, ideas or functions.

This news comes after another spurious iPhone 5 release date was announced - 21 September, according to a App4phone.fr via an unnamed source at a Chinese accessories manufacturer. Yes, that sounds real...

From AllThingsD via Phandroid and Wall Street Journal