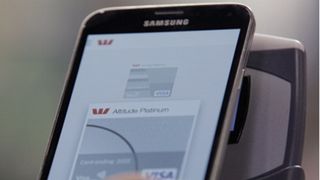 Are we in for a wallet-less future?

Alongside its water and dust resistant body, the Samsung Galaxy S5 is also one of the first Australian smartphones to come with NFC contactless payment.

For Commonwealth Bank and Westpac customers in Australia, this means that at retailers where tap and pay PayPass or PayWave machines are available, you'll be able to simply tap your smartphone to pay - just like your Visa or Mastercard.

"The Australian banks, including Westpac, have invested heavily in this area and partnered with the major card providers to provide this innovation to customers," said a Westpac spokesperson, speaking of contactless payments.

"Customers have embraced the fact that this is a quick and easy way to pay, and by having widespread acceptance, they use it more often."

With the groundwork for contactless payments already laid out and technology now available straight out of the box for Galaxy S5 users, Westpac says that nearly $3 billion worth of contactless mobile transactions will be made in 2015 according to industry-wide forecasts.

The bank anticipates around 3 million Australians will adopt the technology next year as well.

"With contactless transactions now becoming available on people's mobile phones... we believe it's going to make transactions even faster and more convenient for customers."

Contactless payments for Commbank customers have been available to Galaxy S4 users as well as other Android and iOS users through PayTag - a sticker with an NFC-enable chip that can be attached to the backs of smartphones - since late last year.

According to a survey conducted by CommBank, 73% of Aussies expect mobile wallets to replace their entire physical wallet, including cards and cash, in the next seven and half years.

"As a nation, we've been at the forefront of the contactless payments revolution and Australians appear keen to lead the world into the new era of the mobile wallet," said Angus Sullivan, Executive General Manager for Cards, Payments, Analytics & Retail Strategy at Commonwealth Bank.

"While there may always be a need for different payment methods, such as cash for emergencies and cards for travel, it's clear the mobile wallet is set to become a part of many Australians' everyday lives," he said.

While ease and convenience may end up being the main driving force for the uptake of NFC mobile payments, security issues may still worry users, especially with news of bugs such as Heartbleed.

"Paying with a mobile is just as secure as a card, with all payments backed by Westpac's Fraud Money Back Guarantee," Westpac said.

As an extra step for security, you can also choose to sign in to the mobile banking app before each purchase, and you can disable mobile payments in the phone's NFC settings at any time.