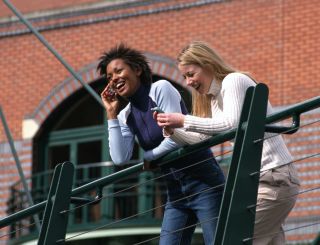 "Sorry, my email is down at the moment"

Something to think about next time you are on a boring conference call. According to a survey by BT Conferencing, 68 per cent of us have dialled in to a conference call wearing our pyjamas, almost half of us wearing only our undies and 20 per cent just didn't bother with clothes at all.

Unsurprisingly, many of us have called into an audio conference from a train or a car, but calling from the ski slope and the beach is also popular. Some people even admit dialling in from outside a funeral service.

While on a call, people admit to taking the time to cook, change nappies, feed babies and shop. Amongst the stranger stuff we've been doing while on a call is painting the ceiling, getting waxed, having a massage and getting our feet done at the chiropodist.

Aaron McCormack, CEO of BT Conferencing, said: "It's clear from our survey that conferencing lets you do things that would otherwise be impossible. You can have a meeting any time, wherever you are and wherever your colleagues, customers, or suppliers are. We're not suggesting you let work take over your life. We believe conferencing is a very valuable tool that can help you balance your work and home life responsibilities."

Figures from industry analysts Ovum suggest that the days of joining a conference call wearing your PJs are numbered. The use of high quality video conferencing where you can see the other participants is growing fast. Ovum expects 26 per cent of conferences will be held by video by 2012.