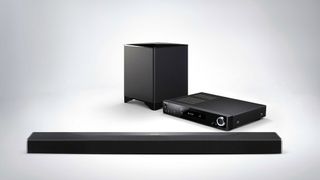 Think surround sound systems have to be expensive bulky monstrosities that spew wires and eat up whole corners of your room? Think again.

To dispel that notion of sound systems being large-and-in-charge behemoths, Onkyo is introducing its new LS7200 soundbar that works with both object-based surround sound technologies, Dolby Atmos and DTS:X.

The soundbar in question squeezes a 5.1.2 surround sound system into a soundbar, a wireless subwoofer and an AV center control unit, which will apparently support Spotify Connect, TuneIn and Tidal.

Besides the two object-based technologies, the LS7200 will support several other audio solutions including DTS Play-Fi technology for multi-room sound, AirPlay and FireConnect.

Worried that the lack of Atmos and DTS:X content will ruin your experience? Onkyo says its new wares will be able to upmix standard surround sound to 3D sound via DTS’s Neural technology, while Dolby’s Surround Enhancer technology “wraps sound around the audience by creating virtual rear speakers.” Fancy.

Onkyo’s LS7200 is set to launch in the UK starting on January 17, 2017 and will cost £900. (We’ve reached out for US and AU pricing and availability and will update this story when that information has been provided.)

While Onkyo’s is the latest soundbar to be outfitted with object-based audio technologies, it’s far from the first on the market: Samsung and Yamaha both have Atmos-equipped soundbars out already.

While Dolby and Yamaha might offer a bit more power, Onkyo’s is a fair bit cheaper, making it one of the first to offer the in-home cinema experience for under £1,000.