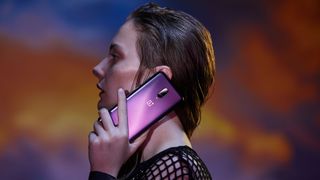 OnePlus unveiled its latest flagship phone, the OnePlus 6T, two weeks ago, and while at launch it was only available in two shades – Mirror Black and Midnight Black – those hoping for a more colorful option haven't had to wait long, with OnePlus confirming that the 6T will also be available in Thunder Purple.

The new color first appeared in leaked images, and we now know it'll be coming to the UK, US and India in the coming days – although anyone who's already bought the OnePlus 6T but would have liked a color other than black is likely to be disappointed that the purple option wasn't available at launch.

You'll be able to buy the Thunder Purple phone from the OnePlus website on November 15, but it's unclear at the moment whether third-party retailers will be stocking the device.

It's set to cost $579 / £529 with 8GB of RAM and 128GB of storage, which is the same price as that variant of the Midnight Black and Mirror Black versions of the OnePlus 6T. You won't be able to get the 6GB of RAM with 128GB or the 256GB variant in Thunder Purple.