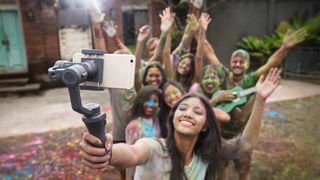 DJI definitely seems to be keeping busy – less than a month ago the Chinese manufacturer debuted the lightweight Ronin-SC gimbal for mirrorless cameras, which was followed closely by the release of its new FPV Goggles.

According to a 15-second video posted on its official YouTube channel, DJI is gearing up to announce something new on August 13.

The teaser itself doesn’t seem to hold any clues as to what might be making its debut next week, but based on some other evidence, it could well be the next generation Osmo Mobile smartphone gimbal.

DroneDJ was the first to unearth details about the Osmo Mobile 3, thanks to a public FCC filing made on July 31.

Amongst the paperwork filed is the user manual for the upcoming gimbal, giving us a clear idea as to what to expect. The Osmo Mobile 3 will be larger than its predecessor, with dimensions of 286 x 126 x 98mm and weighing in at 405g. However, the phone grip will fold down to rest alongside the handle for easy storage.

It also looks like the new gimbal will be able to fit bigger and wider phones (perhaps even the newly announced Samsung Galaxy Note 10 series). It will be armed with Bluetooth Low Energy 5 to optimize power consumption and, unlike the Osmo Mobile 2, will charge via USB-C.

Droning on and on

If you’re expecting DJI to announce new drones, you may need to wait a while. An eagle-eyed Norwegain reader pointed out to DroneDJ that a special section on the DJI website lists the paperwork for the European Union Declaration of Conformity – including those for the DJI Mavic 2 Pro+ and the DJI Mavic 2 Zoom+.

We’re not expecting the possible new drones to make an appearance until 2020 as DJI recently announced it will be implementing aircraft sensors in its consumer drones starting January 2020. These ADS-B sensors will allow the drone pilot to detect and avoid low-flying helicopters and airplanes nearby.

DJI has also filed a patent for an interchangeable lens camera that looks very similar to the Hasselblad X1D-50c. A deep dive into the patent application by Gizmodo Japan has unearthed design images and 3D models of the camera from various angles, giving us a complete look at what could be DJI’s first mirrorless camera, including the markings on the rear controls.