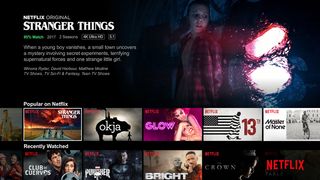 Imagine how much Netflix binge watching you could do if minor inconsiderations like work, emails, or social networks weren't getting in the way. Well, that might well be easier in the future, thanks to a pop-out player Netflix is testing for Windows and macOS.

First reported by Engadget, the mini player can be launched with a click from the web player in the browser, and then stays on top of other windows so you can get on with something else while keeping an eye on Netflix.

It's not clear just how widely this is being tested: we haven't spotted the new feature ourselves but some users have come across it and posted the news on Twitter. As with any Netflix test, there's no guarantee it'll make it as a permanent feature.

Netflix hasn't officially commented on the new pop-up player, except to confirm to Engadget that a test is underway, so we'll have to wait and see whether it makes the grade. It seems something that a lot of users would find helpful though.

Only yesterday we brought you news of another Netflix test that's underway: adding the option to have your phone vibrate in time to the movies and shows you're watching. Again, we're not sure if that's going to become a permanent feature.

But it's clear that Netflix is experimenting with all kinds of ways to help it stand out in an increasingly crowded market. Two of the biggest names in tech and entertainment – Apple and Disney – are launching their own Netflix-style services this year.

Netflix is going to need more of its Originals to hit their targets, as well as a steady stream of special features in its software and apps, if it's going to carry on competing once the content libraries become more fragmented.

If you're a Netflix subscriber, keep an eye on the web player and the service's apps on other platforms for new features and further tests as they appear.