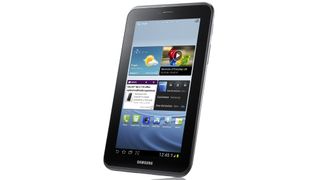 The Galaxy Tab 2 7.0 to now work with Verizon LTE

The Federal Communications Commission got its hands on a new model of Samsung's Galaxy Tab 2 7.0 that will play nice with Verizon's networks.

The tablet comes equipped with a new bundle of wireless radios that are compatible with Verizon's LTE service, the FCC confirms.

Other than Verizon support, this 7-inch tablet is exactly the same hardware that recently hit store shelves.

See our hands-on video review of the Galaxy Tab 2 7.0:

More of the same

While Samsung's low-cost tablet has cut some design corners, it's still an impressive device on a budget.

The quality media playback makes it a viable competitor to the Kindle Fire and Apple iPad for those who put size and price as their chief concerns.

There was no official launch date announced, but sources point to the tablet arriving on Verizon shelves soon.