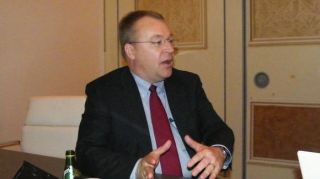 Finnish smartphone maker Nokia is firmly committed to Windows Phone, but recent comments made by its CEO suggest that tablets also powered by Microsoft's OS could be another point of interest for the company.

The Australian Financial Review reported Monday that Nokia might be poised to enter the increasingly crowded tablet market, judging from comments made by company chief Stephen Elop while speaking to reporters in Sydney.

While making it clear that Nokia has yet to make any formal decision let alone announce or launch a tablet, Elop did refer to such devices as complementary to its current Windows Phone products.

"We haven't announced tablets at this point, but it is something we are clearly looking at very closely," the CEO said. "We are studying very closely the market right now as Microsoft has introduced the Surface tablet, so we are trying to learn from that and understand what the right way to participate would be and at what point in time."

Elop made it clear his company favors partnering with Microsoft, though a public relations executive reminded him that, again, nothing formal has been decided.

"We would consider any option [Android or Windows]… It is important to note that the opportunity for companionship is something that any user is looking for," the CEO said.

Android may not be a serious contender for Nokia, as the CEO appears to have no regrets 2 years after hitching his wagon to Microsoft - the company where Elop previously headed up the Office business division.

"Our first focus on what we look at is clearly in the Microsoft side," Elop explained, noting that Nokia is watching and waiting to see what lessons might be learned from Microsoft's own Surface tablets.

"When you think about the Lumia 920 running on Windows Phone, having a Windows tablet or PC or Xbox is something that will give us the opportunity to have a pretty integrated experience," the executive concluded.