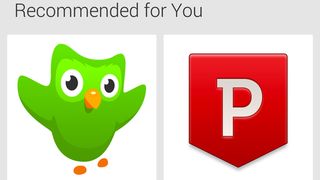 A Google Play Store update is reportedly being rolled out and includes further integration with Google+, something that has gotten it in trouble with YouTube users.

The updated Android app for downloading Android apps gives users the ability to view and share their stream of Play Store activity to all of their Google+ circles, according to Android Police, which got a hold of the signed-off APK.

We tested the APK on our own new Nexus 7 tablet, and found that this meant there's now an activity feed that will show +1s and app ratings, and it will all link back to your Google+ profile.

This should help provide better app recommendations among friends, as it will include the photo and name of your Google+ buddies and a blurb about what they said about the app.

Reviews could be more relevant through the Play Store's new Google+ integration and thankfully, the review process is a little easier to complete too.

The blank stars under "Rate this app" are now bigger, enticing long-time-downloaderss-first-time-reviewers to actually leave their opinion.

Once a review is complete, there's a dedicated "edit" button. Previously, users had to assume (correctly) that tapping their star rating would allow them to edit the review.

Don't like the review you left? There's now a delete button at the bottom of your editable review, just in case you left a smug comment on an app that turned out to be really popular: "Snapchat, this'll never catch on!"

Something Google+ devotees and privacy advocates will appreciate is the indicator for in-app purchases that the Play Store update will reportedly deliver.

While Android Police didn't find any information tied to this "In-app purchases" warning message, it should help weed up errant downloads of "free apps" that just make you pay for everything after you have it up and running.

The Google Play store 4.5.10 hasn't been released as an over-the-air update yet and neither have the official release notes, so these features aren't final.

However, judging from the APK, Google+ has the potential to enhance or further irritate users when searching for new Android apps.