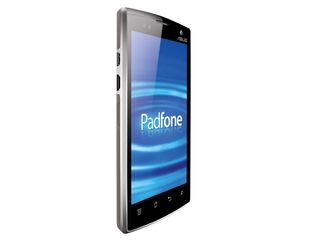 Asus revealed the new Padfone earlier this week at Computex 2011

Asus CEO Jonney Shih unveiled a prototype of the company's new Padfone at Computex 2011 in Taipei this week with an Android-based 4.3-inch smartphone capable of turning itself into a tablet with a handy 10.1-inch touchscreen dock.

Although details are limited, we'd bet the new tablet/phone hybrid will be running Android Ice Cream Sandwich by the time it debuts in early 2012.

Talking with Asus, the company told TechRadar it was definitely going to be running "the latest version there is" of Android, so Ice Cream Sandwich would make complete sense - the OS will be designed to run across both traditional smartphones and tablets.

Asus says it's working with Google to get the operating system right, and is looking to get the ball rolling with the Padfone early next year. It sees the software as the main sticking point right now, "the hardware is not a limiting factor," we were told.

Asus is still to settle on the final dimensions and tech specs for the Padfone before releasing it as a final retail product, although we'd bet on it having an Nvidia Tegra processor - and perhaps the new Kal-El quad-core variant at that.

Asus has been making phones for years, but the devices have rarely seen the light of day in the UK. That's set to change with the Padfone though, a device which has got Asus so excited it just had to announce it right now anyway.

What we do know at the moment is that Asus won't be dropping its relationship with Garmin, so there will be a high-end GPS module onboard.

One thing's for sure, the screen/dock will have to be a smart piece of kit, as it's going to have to house a secondary battery as well as, potentially, extra storage.

Asus is also promising a seamless transition between displaying on the phone and on the tablet - that means no rebooting just to get into tablet mode.

In addition to the new Padfone, Asus also revealed a number of other new products at Computex 2011, including "a 3D tablet, ultra-thin and light notebooks and netbooks, plus the world's first PC motion sensing controller and a sleek 27-inch All-in-One HD desktop".

Asus CEO Jonney Shih said of his company's Computex 2011 line-up that: "Breaking the rules and changing the status quo are the keys to our success, and we strive to offer customers an experience that surpasses their expectations."

The other most interesting new product unveiled by Asus at this year's event in Taipei is the new Eee Pad MeMO 3D, "designed to be an alternative take on the 10-inch tablet that is fast becoming a standard size".

The portrait-oriented new Eee Pad is the latest follow-up to Asus' recently released Eee Pad Transformer, and has a 7-inch multi-touch screen, a bundled Bluetooth headset and, most interestingly, "flipping the MeMO 3D into landscape turns it into a glasses-free 3D display that adds a new dimension to mobile entertainment".