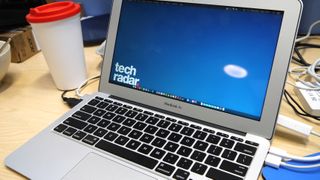 Update: Apple has unveiled its new MacBook, which arrives sporting Intel's new Core M CPU, a high-resolution display and, as predicted below, a reversible Type-C connection. (Not that we can see into the future, or anything.)

If you're one of the people who threw their arms up in protest when Apple removed the optical drive from the MacBook Pro, guess what: a Retina MacBook Air with a single USB is incoming, and it's going to blow your tiny, progress-fearing mind.

Confused? To recap: Apple is reportedly taking the seemingly drastic step of replacing all of the MacBook Air's current ports with a single reversible USB Type C connection in order to make the machine as slim as possible. And just like banishing the long-useless optical drive from its laptop range, Apple's latest stroke of genius is going to see it once again launch one of the most portable and desirable laptops in the world.

But will it be practical? Until recently, I wasn't so sure. I take my 11-inch MacBook Air everywhere and connect it to multiple DisplayPort and DVI-equipped monitors. If I'm near a power outlet I'll clip in the MagSafe 2 connector to save battery cycles, and for any serious work I can't be without a wired USB mouse.

Moving to a single USB Type C port would require an adapter to connect all of those at once, which would prove a compromise too far -- right?

For a portically-challenged MacBook to work, wireless technology must come into play. It's just as well, then, that Intel -- which is proving the driving force behind the no-wire computing movement -- has begun to take it seriously.

Intel unveiled its fifth-generation vPro Broadwell CPU earlier this week, which natively supports two technologies key to wire-free computing: WiDi (for connecting devices wirelessly to displays) and WiGig (for connecting peripherals such as monitors, mice and printers). WiDi has been finicky in the past, but Intel has refined the tech to the point where connecting a WiDi-enabled laptop wirelessly to a display or dock is as simple as walking up to it. Simply put: it's awesome.

Historically, WiDi has only been compatible with Windows (Apple TV provides similar screen mirroring functionality for Apple users), but it is highly likely that the Retina MacBook Air will use Intel's Core M Broadwell CPU, which can stream wirelessly to displays and docks using WiDi v.5.1 and WiGig.

Integrating WiDi into the upcoming machine would open up the opportunity for Apple to bake WiDi functionality into a new range of Cinema Displays (WiDi can stream video wirelessly in 4K) -- or even extend functionality to non-Apple displays through an adapter.

With the ability to dock wireless displays and peripherals, charging and power management becomes the final challenge in banishing wires for good --- and Intel is already working on it. According to a blog post by Intel Project Manager Colleen Cuthbertson, Intel has successfully demonstrated charging a laptop sitting on a two-inch thick table using a magnetic resonance pad underneath -- a method she writes could be deployed in coffee shops and other commonly used mobile locations.

If any company is going to take a calculated risk by scrapping ports -- including its much-championed Thunderbolt 2 specification -- it's Apple. Should it drop a few ports and succesfully integrate wireless tech into the Retina MacBook Air to make it give it industry-leading, catwalk-thin dimensions picking up a new adapter or monitor will be a small price to pay.