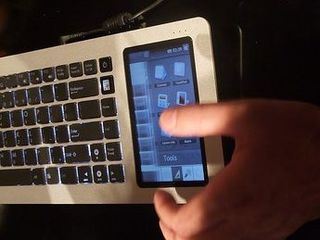 TechRadar at CES 2009 in Las Vegas

Asus went touch crazy at its CES press conference, demonstrating a mini second touchpad screen for regular notebooks as well as a tablet-a-like Eee PC T91. It also introduced an amazing-looking Eee keyboard, an Atom powered machine in itself that can communicate with TVs and monitors to display photos and other media without cables.

Asus CEO Johnny Shih seemed rather pleased with the company's figures for the last year, when the company showed not only phenomenal Eee PC sales, but also good sales on its standard notebooks.

Shih talked up innovation as a result of consumer feedback, mentioning the We PC initiative in cahoots with Intel. "These are the first socially inspired PCs – we've received 2,000 development ideas" said
Shih of the project. He spoke of three distinct ideas behind Asus' product developments - mobile computing, touch-based computing and shared computing.

First, Shih unveiled the S121 ultimate thin and light notebook with a 512MB SSD. "It gives around 3 times the transfer rate" of conventional screens, said Shih. Asus called it "a new-generation of mighty mini netbooks." We'll keep to the more conservative netbook tablet.

Dave Fester, General Manager of OEM marketing at Microsoft demonstrated an N20 running Windows 7 on an Eee PC and using multi-touch finger gestures to navigate Microsoft Virtual Earth. "You haven't seen Windows run that fast before" he quipped. It featured the usual multi-touch bonuses, including double-taps to zoom into the image. Unfortunately this fun stuff was marred by a traditionally inane Microsoft style of presentation which also squeezed in Windows Live Wave 3. Old news.

We were also shown AI Touch Media, a clean-looking circular media browser. Amusingly it crashed, but it certainly shows the potential for multi-touch with laptops – even if the usefulness is slightly limited.

Then we were shown a minature instant-on screen doubling as the touchpad of a laptop. A brilliant 4.3-inch touchscreen powered by its own processor. It means over 12 hours of battery life, said Asus, since you can launch movies from the file browser on the small screen but show them on the big screen and you don't have to start Windows to do basic stuff. Instead the second system uses widgets. This might sound a bit naff, like a recreation of Vista's failed Sideshow, but actually looks excellent – and surprisingly useful.

And then we were quickly onto the product announcements, which came quick and fast.

First there was the T91 touch-screen convertible Eee netbook. It looks just like a usual Eee, but basically turns into a tablet with a touch interface for navigating apps. A new touch mode launcher looked just like OS X, but we can't blame Asus for echoing the peerless. Yes everybody, it's the tablet PC by stealth! There is also a mobile TV option, though probably not for the UK we'd warrant.

Then there was the fabulous Eee Keyboard. This is a Media Center Extender enabled by Ultra-Wideband HDMI. It also features a 5-inch touchscreen which basically apes the icon-driven home screen on the iPhone or the Sony Ericsson main menu. It connects to various devices and could, for example, show photos or video on your HD TV.

Finally, the Eee Top is basically a mini iMac-a-like that is designed to bring touch computing into main spaces in the home. A new easy-to-use touch interface was demonstrated – it'll run on top of Windows XP. How Microsoft must be loving this; not only do OEMs want Windows XP not Vista, they also want to add stuff on top of it. Hmm. The machine also has a special version of the Opera web browser as well as a stylus.

Shih then showed us a short video of a new shared computing concept, where people can collaborate using the same laptop where the screen folds flat. We'll be talking more about this device in a later piece. "Along with innovation we also insist on driving the best quality," added Shih. He seemed quite pleased with himself, though wouldn't commit in the Q&A to definitely shipping Windows 7 when it launches. He also said some interesting things about Android.