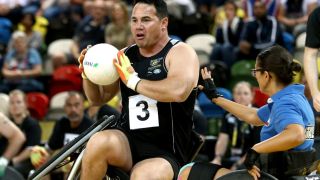 This year's Invictus Games will take place in the Sydney Olympic Park, Australia.

Prince Harry came up with the idea for the Invictus Games in 2014 as a multi-sport event that allows armed forces personnel with injuries, sicknesses or wounds to compete and show what they can do. The word Invictus is Latin for "the unconquered" showing these competitors have not been bested by their traumas.

The games themselves, held at the Sydney Olympic Park, vary from power lifting and track events to cycling and sailing. There are 11 medal sports in total and these include the likes of golf, swimming, cycling and wheelchair rugby. Over 500 service personnel from 18 countries will take part this year.

And the great news for those wanting to watch the Invictus Games at home? It's really easy to find a free live stream of Sydney 2018 - and from absolutely anywhere on Earth.

Live stream the Invictus Games 2018 for FREE in Australia

This year ABC has the rights to the Invictus Games and will be sharing all the action live. The broadcaster is working with its ABC iview platform to share all the action live streamed, meaning you can catch it online via a laptop, tablet, TV, phone and more. This is also available via its YouTube channel here.

And don't worry if you're out of the country and want to catch the live broadcast, as using a VPN will let you watch as if you were back at home on your laptop, mobile or other TV streaming device...

Use a VPN to live stream the Invictus Game from anywhere

Live stream the Invictus Games with a VPN
If you're desperate to watch every sporting event at the Invictus Games but nobody is broadcasting where you are, then you could always use a VPN to access it. In short, a VPN allows you to change your IP address to another region. We've tested hundreds of VPNs and can recommend these as the three best VPNs currently available:

1. Express VPN (comes with a 30 day money back guarantee)
This is the #1 rated best VPN in the world right now. You can watch on many devices at once including Smart TVs, Fire TV Stick, PC, Mac, iPhone, Android phone, iPads, tablets etc. Check out Express VPN and get 15 months for the price of 12.
2. IPVanish: claims to be the world's fastest VPN, it supports up to 10 devices per subscription
3. VyprVPN: blazing speeds make VyprVPN a great choice for 4K video

Which other countries can I stream the Invictus Games live using a VPN?

How to watch the Invictus Games: UK live stream

Thankfully the BBC has stepped up to offer coverage of this year's Invictus Games all via BBC One. That means UK residents who have paid their licence fee can enjoy the action on TV, summarised at a decent hour, but also via the BBC iPlayer app or on catch up using most internet connected devices.

Not in the UK? Don't worry, you can download and use a VPN to take your laptop or mobile virtually back to the UK and watch as if back in blighty.

How to watch the Invictus Games: US live stream

For those in the US the ABC treatment will also be extended to offer the action - assuming that is that you can get yourself out of bed to catch the events where you are. The Australia-based games aren't exactly ideal for those in the US.

How to watch the Invictus Games: Canada live stream

Canadians will also be able to access the games via a local broadcaster, in this case TSN. That means you can watch the events on TV or use the TSN app to access content that way.