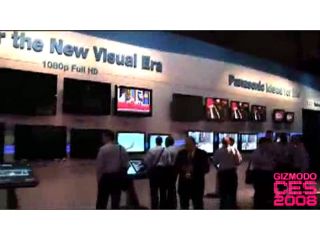 Like most self-respecting tech fans we all read and enjoy Gizmodo regularly. But the giant gadget blog may have overstepped the line this week at CES by interrupting presentations from Motorola and others with the aid of a universal TV remote.

Bloggers working for the fun-loving site used a TV-B-Gone remote to surreptitiously switch off screens during presentations as well as others on display, including entire walls of the latest sets on show at CES.

However, many of the more conventional online publications are now pointing fingers at editor Brian Lam and his crew for committing the cardinal sin of filming their prank and boasting about it. You can see the video for yourself here.

It's undeniably funny for a moment to see po-faced electronics companies being given a jolt when their gear mysteriously stops working. But as the video progresses and it becomes clear that the stunt stopped ordinary people (the Motorola presenter for one) doing their jobs, the smiles drop somewhat.

That's not all - the changing face of media means that bloggers are starting to be accorded the respect given to traditional journalists in being given access to shows like CES and all the privileges that entails. Which is as it should be - after all, news is news and no one can say Gizmodo's 10 million daily page views are worth less than the far smaller numbers returned by traditional media.

What many, like Cnet, fear now is that Gizmodo's antics could see those press privileges being revoked for all bloggers in future, leaving the field clear for Reuters, the New York Times, IDG and the other stick-in-the muds. That would be a backwards step for online media, which is why we hope the organisers at least try to see the funny side.