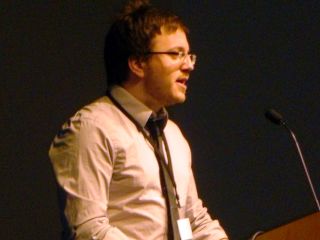 Twitter's Alex Payne at the 140 conference

Twitter has almost been a victim of its own success, but it's got big plans for its growth, including location-aware tweets, a more open API and, eventually, plans to provide a one-stop-shop for your online identity.

At the Twitter conference - called 140 - Alex Payne, Twitter's API Lead, said that with millions of messages posted each day the service has solved its early problems of scale and stability, and was ready to move on.

"Hopefully we've already been through the catastrophe phase. Where we're at now is very, very different; fundamental pieces of our technology have changed," explains Payne.

"We've pitted it against the other big enterprise grade message queue systems out there and we've pretty much smoked them all in terms of benchmarks."

The next problem is taking advantage of Twitter's success. "We've become a household name sooner than we expected and now it's about figuring out what do we do with all these new people," explains Payne.

Over the last few weeks Twitter has added real-time search for all users. In the long-term, tweets will carry information like your location, but Payne can't say when: "In a perfect world we'd like every tweet to have its own key value store for whatever metadata [developers] want. In terms of implementation it's still too far off to say when we're going to deliver that; the majority of our team is still focused on handling the scale of the social graph."

Instead of trying to build every possible feature themselves, the Twitter team wants to support software developers who use Twitter as a platform.

The big change is that instead of waiting for Twitter clients to connect and ask if there's anything new, a new streaming API will push information out automatically, just like email.

Payne believes the push model will produce a whole new class of Twitter apps, but he emphasises "For us this isn't about a race to a thousand apps. It's not about having the most apps - it's about having the best."

No limit on tweets

To help that happen, Twitter plans to drop the current limit on the number of tweets an application can send or request and only block apps that appear to be sending spam or abusing the site.

There are also improvements to the search tools developers can use in their apps. The plan isn't to make money from Twitter developers the way Apple does with the iPhone app store, Payne says.

"On a number of services we've watched developers get started and then have the rug pulled from under them. They need to know 'Is it OK to build a business on this, is it OK to retain this data?'. We're not interested in charging for any of these developer features any time soon but we do want to make it very clear what we're going to be providing and what you can expect from Twitter."

Copying vast numbers of tweets into caches and applications using the push API won't make it harder to delete "that tweet you wish you hadn't sent", Payne promises. "We say in our terms of service that developers have to respect instructions to purge a tweet."

Enabling users to manage their reputation is key to another upcoming feature - making Twitter into an identity service.

You can already use your Twitter identity to comment on some blogs and Payne says more services will be able to work with Twitter in the future: "Anywhere a portable identity might be useful, we're providing the tools to use it."

New tools will build on the developing OAuth standard (using a Twitter implementation that will come out of beta soon), but they will be designed for mainstream users: "OAuth provides us with a lot of flexibility, a really great user experience and real access to security and access controls we haven't had until this point. We're working to make it really secure and easy enough for the least technical user to understand."