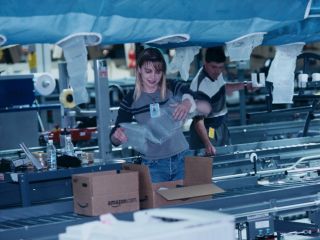 The likes of Amazon will benefit

Internet shopping is set to experience a huge rise as people dodge the credit crunch by taking advantage of cheaper online prices, with Monday 8 December to be the UK's biggest net-shopping day.

Figures from the Interactive Media in Retail Group (IMRG) and Capgemini suggest that £13.16billion will be spent online in the final quarter of 2008 – 15 per cent higher than the same period last year.

This may be a major rise, but actually indicates a slow-down on online shopping growth.

8 December – a Monday – is apparently going to be the UK's most frivolous shopping day with an estimated £320million going to be spent online.

Nearly half (42 per cent) of that shopping will be done outside of traditional shopping hours – so before shops open in the morning or after 6pm.

But the peak shopping hour is expected to be between 1pm and 2pm on 8 December, when £29million will be spent online.

We didn't get any details on which minute will be the busiest.

"British shoppers will beat the crunch with internet prices this Christmas, spending more than a billion pounds each week in the run-up, said IMRG Chief Executive James Roper.

"The internet is well established as one of consumers' most powerful economic weapons against tough times. Retailers and suppliers will be under extreme pressure to price competitively this year, so there will be a lot of volatility out there and fantastic bargains."