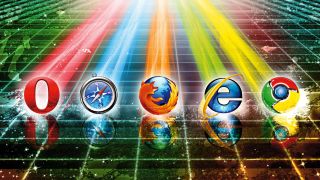 Let's quite it with silly restrictions

When did the internet get so darn small? From news websites and online shopping to booking a holiday and streaming video, the entire internet is predicated on knowing where you are and where you've been, with adverts and trackers that follow us around online.

Are we just a part of somebody else's marketing campaign or is there a way to circumvent its corporate restrictions and make the World Wide Web global again?

"Where technology takes with one hand, it gives with the other, and there are many things that we, as individual internet users, can do to evade restrictions, become more anonymous, prevent tracking, and generally 'hack' the internet so that it works the way we want it to, rather than the way they want it to," says Douglas Crawford at BestVPN.com.

Am I really being tracked and targeted online?

Oh yes. "Consumers know they're being tracked, but they don't understand how," says Andy Kahl from Ghostery, which helps manage the data collected about you as you browse.

"I might be able to easily understand why an advertiser thinks that I might be interested in new tech gadget if I've been tablet shopping, but what else is being collected?" says Kahl.

"The lack of clarity makes people want to avoid the endeavour entirely."

Ghostery shows a list of exactly which trackers it's blocking on each website. Retail websites like Argos, John Lewis and Currys had – in our random test – nine, 12 and 13 trackers at work, respectively, and in no way are they different to any online retailers.

"Less than half of the technologies placed on websites are placed by the site owner themselves," says Kahl. "Where a website used to be a marketing tool, now it's a launchpad for a whole marketing cloud."

How do I block online adverts?

"We all hate the dancing pop-ups and the flashing belly-diets, but people also want to block 30-second YouTube pre-rolls and interstitials that get between users and content," says Ben Williams, Communications Manager at Adblock Plus, a free web browser extension and Android app that allows its 300 million users to block or filter the ads they want to see.

Is this about ending all online advertising? Actually, it's not.

"We don't believe all ads are bad – in fact we actively encourage those that have the user in mind," says Williams.

"We aim to promote better advertising... to minimise the annoyance for internet users."

How can I get local prices online?

Despite the internet being global, things have drastically different prices depending on where you – or, rather, your computer, phone or tablet – are connecting to the internet from.

"A good example would be entertainment software," says Specka. "The same products have different prices around the world, but customers are usually not able to choose where to download it."

Even basic web searching is affected. Chuck 'Heathrow Bangkok' into Google UK and you'll get advertising and deals from the likes of Cheap Flights, British Airways, Opodo, STA Travel and other UK-centric agents and airlines.

But why should you be restricted to buying only from UK vendors when a Thai-based agent will be much cheaper? The answer is to download a VPN.

What is a VPN?

A VPN scatters your data to proxy servers around the world, which is then encrypted as it travels into the wider internet. They can be slow at streaming video because of the constant redirection of data to multiple proxy servers, but they're getting much better.

Anonymising web proxies like ZenMate or Hide My Ass obscure your IP address. "We believe that everyone should have the opportunity to choose if a website or service is able to use any of the information everyone carries with it," says Simon Specka, co-founder of ZenMate, which lets you mask your IP address.

ZenMate works on Google Chrome (and every Chrome-based browser) and Opera, with iOS and Android versions to follow soon. "It should be a free market where everyone can benefit from global distribution," says Specka.

Are we just talking about shopping?

No. "The internet gets smaller every day since more and more entities try to (geo)restrict users for the sake of their business or political control," says Specka.

There are governments that try to block certain services to obtain control over communication and opinion-making.

Turkey temporarily banned Twitter, something that's only possible because every computer in the country has an IP address that identifies it as Turkish.

"We saw nearly 600,000 installs from Turkey to the Chrome store [after this happened] and over 30,000 mentions of ZenMate on Twitter," Specka told TechRadar.

"We saw similar results following recent internet restrictions in Ukraine and Venezuela. Often this kind of spike is the first thing that alerts us to any issues in a region."

Should businesses make use of VPNs?

Keeping your private data secure is good practice for individuals, and increasingly a necessity for businesses. Many companies provide VPNs for staff to connect back to base when working remotely, for privacy reasons.

"A lot of small businesses are prone to attacks but cannot afford large-scale security," says Specka. "ZenMate can be a step to better protection."

There's clearly a need for action, as seen by the UK Government's launch of the national Computer Emergency Response Team, which will coordinate the management of national cyber security incidents.

Current page: The web that tracks you

Next Page Watch what you want, where you want
See more Web news