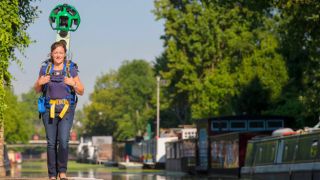 The UK Canal & Rivers Trust has snagged a borrow of a Google Trekker backpack in order to capture Britain's historic waterways for Street View.

Members of the Trust will lug the 40lbs, 4-foot tall backpack along 100 miles of the most scenic waterside locations, some of which are up to 200 years old, starting with the Regents Canal in London this week.

The Trekker, which is human-friendly version of a Street View car, has previously been used to capture remote locations like the Grand Canyon, but this is the first time it done its work on British soil.

It packs a 360-degree camera and takes photos every 2.5 seconds and is made available to folks who wish to chart remote areas in order for them to be added to Street View within Google Maps.

Other locations on the marathon journey will include the 3 1/4 mile long Standedge Tunnel in Yorkshire, the longest and deepest canal tunnel in the country and the blacksmith's workshop on the Grand Union Canal in Stoke Bruerne.

The Trust's Wendy Hawksaid: "We're delighted to be the first people in the UK to get the Trekker on our backs – it's fantastic that our 200-year old network is being given a different lease of life thanks to cutting edge, 21st-century technology. The footage we get will allow millions of people from all over the world to see our canals, rivers and towpaths, and will hopefully encourage some people to make a trip to see them."

Google's Pascale Milite added: "We hope to help boost the discovery of and make these historical canals accessible to more people in the UK and across the world through Street View technology."