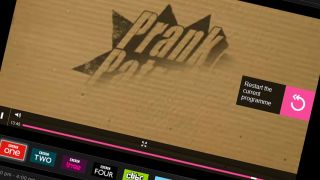 So you can arrive only slightly late to those watercooler moments

The BBC has announced that Live Restart has launched for iPlayer, allowing audiences to rewind and restart live TV.

Although the functionality will be familiar to those who own PVRs, the implementation of Live Restart on the online BBC iPlayer will likely be a popular addition.

Dave Price, head of BBC iPlayer, wrote in a blog: "We all know how frustrating it is when you're stuck in a traffic jam, or delayed on the tube, missing the critical start of your favourite BBC programme.

"Live Restart solves this by giving audiences control. With one simple click of a button viewers can skip back to the beginning of a live programme, ensuring they never miss a moment of their favourite BBC programmes."

The Live Restart feature will only be rolling out to the web service for now – although the BBC has confirmed that it is working on bringing the new feature to other devices as soon as possible.

"Later this year, the BBC will bring Live Restart to BBC iPlayer on mobiles, tablets and internet connected TVs, making it even better to watch live TV programmes online on the devices audiences use, when and where they want to," added the BBC's statement.

Live requests apparently make up 22 per cent of total iPlayer requests from viewers, with the BBC stating that it is seeing 'significant growth' in the demand for live content, 18 per cent up year on year.